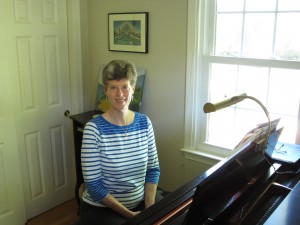 I have been a student of the Alexander Technique for over 30 years and it saved my musical career!  As a young musician I developed tendonitis in my right elbow, and after pursuing the usual medical courses of treatment, found that whenever I returned to playing the piano and organ, the pain and weakness would recur.  Finally I attended a workshop on the Alexander Technique and found that my own faulty habits were the cause of my tendonitis.  I was so excited about the Technique that I began taking lessons in New York and continued my study here in Baltimore a year later. Some thirty years later, I am happy to say that I have never had tendonitis since, and have found the application of the Technique to many aspects of my life enriching and freeing.

In 2010 I went on to train to become a teacher of the Technique at the ATMidatlanticTraining Course, successfully completing the three-year training program (over 1600 hours). Upon completion, I was certified by the American Society for the Alexander Technique (AmSAT), the largest professional association of certified Alexander Technique teachers in the US. AmSAT maintains the highest standards for teacher training, certification and membership.

In addition to my passion for the Alexander Technique, I have maintained an active career as a professional classical musician for over 30 years, playing and teaching the pipe organ and piano, and directing choirs.  I hold a Bachelor of Arts degree in music from Muhlenberg College and a Master of Music degree in Organ Performance from Towson University.  Currently I serve as Director of Music at Epiphany Episcopal Church in Timonium, MD, and teach organ at Goucher College in Towson, MD.  I have served on the Executive Board of both the Association of Anglican Musicians, and the Baltimore chapter of the American Guild of Organists.

In my spare time I enjoy gardening, swimming, biking, reading and walking.